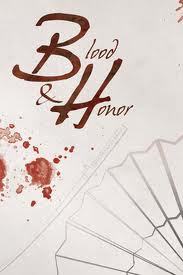 This time I'd like to tell you all about a game that has a particular charm for me, John Wick's Blood and Honor. This samurai game is basically John's answer to the years he spent on Legend of the Five Rings following his publishing of Houses of the Blooded.

Houses of the Blooded was touted as an answer to D&D. I think really it was a call for everything in a game world to have the kind of polish embellished love that combat is afforded. I loved that message, and the clean mechanics that went along with it. The thing that rankled me a bit was the competitive player against player environment. This fulfilled that awesome setting to a tee, but was something that I don't think every group enjoys and I certainly didn't see fitting with my group. Kudos to the author for being daring, but I needed something that could really see some table time. Blood and Honor answers this problem by giving the players the same general goal. But there is still enough dissension among the ranks allowed to really give people some room to role-play, while still retaining some of the really neat ideas from Houses of the Blooded.

The core mechanic involves looking up which of a set of attributes applies best to tell you how many dice you roll. Beauty, Cunning, Courage, Prowess, Strength, and Wisdom cover the gamut. Even at this level, you can tell this game values physical equally with social and emotional ability (compare the 1:2 to D&D's 1:1 ratio). The ability number is modified by any applicable gear, aspects of your character that apply, and if your occupation is applicable. You roll all your dice and try to beat a flat, unchanging difficulty of 10 with the total of all your dice.

But wait, you say, if you roll more than 4 dice you'll almost never fail! Yep. Well almost. See you're not rolling to see if you succeed, you're rolling to see if you get say whether you succeed. The game calls this privilege. If you do fail, the GM says whether you succeeded or failed. Seems kind of boring at first, except there is a wrinkle. If you set aside some dice for your pool, you get to not only give a yes/no, but for each die you say a short chunk of information (a wager) which is true about your success. The more dice out, the more you get to steer where your action leads, and vicariously steer the story itself. So that's the basics, a cool narrative heavy resolution system.

Now on to the depth. Really what the game is about is mimicking the tragic dynamics of Samurai literature. Moving out from the core mechanic, everything is in service of this goal. Before you even make your characters, you collectively make a clan, which determines both the situation of the PCs and the characteristics and drives that make them cohesive. This means that ultimately the clan is the important unit. This is stamped in even stronger with the detailed and enjoyable system used to populate the province that the clan lives in. The PCs themselves are the trusted advisers of a daimyo, a lord in feudal Japan, and fulfilling their job translates into a mechanical advantage. By fulfilling their Duty, they are strong. There is also a bonus when you help others in your group. Now working together is the key. But all that goody goody stuff means no drama, so you also pick an aspect which distinguishes you and may lead to your eventual downfall. Add on top of this a fate-point style system (Honor) which you can gain only by behaving in a manner which is consistent with a code of behavior. The sum total of this is that the deck is stacked for a particular type of play, one rife with drama, sword-fights, and Pyrrhic wars amongst clans.

Combat in this game fulfills the style of the genre. Instead of rolling initiative, you start a fight by being the first to say "Strike!," signifying drawing a katana, with a big advantage to go along with it. You can also "Guard" which cancels this out, but is very likely to cause a fight. You make a contested roll, and if any successes are rolled, you're toast. Dead. You don't half get hit by a katana, if it gets you you're going to lose bits which you distinctly need to live. This might rankle some folks, and a house rule could tone this down, but that would miss the point. The idea is you don't casually kill someone without risking your own death, it is far far safer to dispatch someone through subtler means.

You gain experience in Blood and Honor, but the real advancement focus is building up your province, conquering other provinces, or otherwise improving the clan. The setup for this is rewarding, and a neat opportunity for your players to explicitly set up the game world. There is a place in this system too, to set up a successor to a character, have children, have them take up the father's sword, or even vie for the position of Daimyo. There are also copious sections of advice in the book that help the players and GM set up these really interesting kind of events, as well as how to make the general role-playing experience a lot of fun. This advice borrows heavily from the spirit of the Play Dirty book mentioned in a previous blog post, without the more inflammatory elements. A very pretty book with a clean layout and clear structure.

So my group played this to very positive results. We actually hacked it a bit, keeping the game elements the same but re-skinning it into the Firefly universe (If you're interested in my notes check it out here). The Clan became the Ship, the jobs had different names, but it was really the same game. It took a little bit to get everyone to understand what privilege meant, and to accommodate the shift in game focus/narrative freedom, but this happened pretty fast. The group had a lot of fun, and were soon reveling in adding lots of cool detail to the game. The tricky part is this is a game for a GM that can think on their feet. That said, there is a dynamic that quickly emerges where the players essentially play themselves. The GM is there to help arbitrate disputes and flesh out the world rather than hand out the plot to the players. The other part of the game is that you have freedom as a player. Freedom to make the game great or miserable for the fellow players. So you need an airtight social contract to play this game, even in a well-established and comfortable group. Once that's in place you can have a ball. By the end of our session, there was a group consensus that they really owned the world we made together, and I can hardly ask for more buy-in to a game then that.