In addition to reviews and discussion I also like to keep everyone up to date with what is going on at the table with the Miami Gaming Authority, the gaming group to which I belong.

Last night brought us the epic conclusion of Expedition to the Barrier Peaks, the classic Gary Gygax module. The GM for this campaign, Dan, recast the original adventure to work with Savage Worlds.


It's been a long time since he took the GM seat, and pulled off a pretty ambitious undertaking for his return. He also added some extra spice to the end, including some extra meta-plot, a self-destruct sequence, and diving away from an explosion. Now we fervently hope that our poor characters didn't irradiate themselves too much to reproduce in the process. A good time had by all. 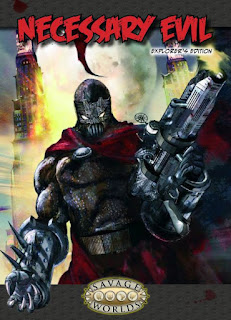 Next up I'll be running a one-shot of Marvel Heroic Roleplaying. This may end up replacing Savage Worlds for the upcoming Necessary Evil campaign if it plays well for our group. For those unfamiliar with it, Necessary Evil is a plot-point campaign for Savage Worlds written by Clint Black, Scott Pyle, an others. The conceit of the setting is that an alien invasion has eradicated the super-hero population of Earth. The only people left to save the world now are the super-villains. It's a bit toward the "grim'n'gritty" side, but has a dark humor about it which both loves and lampoons its source material. I'm hoping the system change will ramp up the comics flavor, if it's not to taste we'll have our go-to Savage Worlds to fall back on.

Expect more updates as they develop, hope that you enjoy hearing about our exploits!
Posted by Whit at 10:59 AM