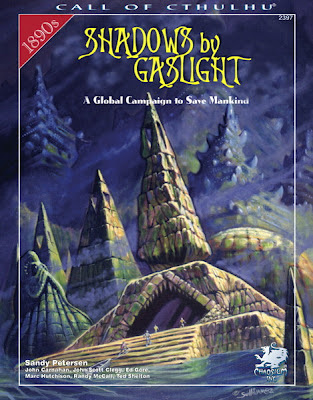 Hi All, this is an Actual Play review, but it's not quite what you think. This is actually a review of the actual play audio game from Yog-sothoth.com (YSDC), in which the Bradford Players tackle the classic Call of Cthulhu module, "Shadows of Yog-sothoth" by Sandy Peterson. In this recording the campaign has been recast in the Gaslight era. For those less familiar, most Call of Cthulhu campaigns are set in the 1920's, but some are set in the Victorian era circa 1890 or so.

YSDC is well known for it's podcast, "Yog Radio," which recently had its finale after a very impressive run ("News from Pnakotus" and the "Silver Lodge" carry on this tradition, YSDC is certainly not disappearing from the net airwaves). Host Paul "of Cthulhu" gives us a glimpse of nearly everything Lovecraftian in every show. Perhaps not quite as well known, YSDC also produces high quality recordings of their regularly running campaigns, and has many years of recorded audio. These recordings are recorded in 3D stereo, and with headphones it really feels like you've just sit down at the table to play with an experienced and companionable game group.

Their most recent offering "Shadows by Gaslight" sees Keeper Helen take the group through an engaging story of an insidious plot which spans several continents which might spell the doom of the earth itself. We have a curious cast, from a Texan landowner, a former Boxing Champion, a young and earthy would-be Debutante with a 'colorful' aunt, and an edgy Artist (and a few others, but I shan't spoil that). The characters, much like the campaign itself, have a slightly more pulpy tinge while still being very Lovecraftian. Half the fun of Call of Cthulhu is unveiling the mystery, so I don't want to spoil too much of the plot. Suffice to say you have an epic campaign that will keep the listener engaged fully in the story.

Call of Cthulhu, while certainly a venerable system, still succeeds exceptionally well at what it was designed to do: fade into the background in favor of role-playing. The players in Shadows by Gaslight do this quite well, and by the third or fourth episode you tend to become just as attached to the characters as the PCs themselves. But it's not all seriousness, there is occasional and fun out-of-character chatter that we all enjoy at our own gaming table. Essentially, in these recordings, the Keeper and Investigators invite you into their gaming lives, which results in something very unique and special.

I have a few provisos about these audio game recordings. One is that these recordings are more or less verbatim, so its not something you would sit down and listen to for five minutes. This is the sort of thing that is good for a raining day, a quiet vacation, or a commute (my personal favorite). One issue in previous audio games was a tendency to get lost on what happened in the previous session. In this audio game, however, Paul of Cthulhu recaps the previous session in his dulcet tones. This is an awesome addition to the recordings and is great for things that might have been unclear. One other minor quibble is that the volume can get indistinct sometimes, especially on portable devices. I'm less experienced with audio, but may be some kind of re-leveling might help. These are all minor points though, overall these recordings are rather remarkable.

I strongly encourage you to check out the Shadows by Gaslight over at YSDC. If you like it, check out their previous recordings. If you love it, scramble to pick up one of the last few copies of Lovecraftian Tales from the Table, the compilation of two of their best games. Can't recommend these audio games enough. Their is a ton of stuff in their shop that is awesome (including geeky magnetic letters). Even better there is an upcoming campaign of "Beyond the Mountains of Madness."