3:16 - Carnage Amongst the Stars: Read-through Review 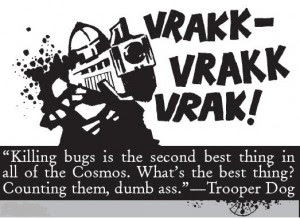 Next I'd like to take a look at one of those indie gems that never quite get the press they deserve. While its been out for some time, 3:16 - Carnage Amongst the Stars accomplishes a number of things which small indie games usually fall flat on. It's mechanics are simple but not shallow, it encourages role-playing without leaving groups that are lighter on the role-play in a vat of awkward narrative spaghetti, it isn't a one-shot wonder but is built on campaign play. This is all really impressive because the core of the game was written for a write-a-game-in-24-hours contest (24-Hour RPG, which is a neat idea in and of itself). What this leaves us with is a very tight game, meant to emulate the bug-splatter military sci-fi - Starship Troopers, Warhammer 40K, Armor, Starcraft, Aliens, etc.

The core of the game is so clear-cut, it seems simplistic at first. To do something you are trying roll a 10-sided die under or equal to a target number. You're characters have two main stats, Fighting ability and Non-Fighting ability, rated 1-10 which determine what you're trying to roll under. Fighting is for fighting, Non-Fighting is for... you guessed it... not. Each PC has various kinds of equipment, a short health track for taking damage, and strengths and weaknesses. Strengths and Weaknesses are like get out of jail free cards. Along with a short vignette that you narrate, you can spend one of these once-per-campaign abilities and get out of the current situation with a win or a loss on your terms.

The focus of this game is combat. That's not to say that drama and RP aren't part of it, they definitely are, but you play this game to splatter aliens in between gradually questioning why you're out there splattering other species. Racking up kills is really the focus, and plays into advancement. Combat is simple, you have your squad and the aliens at various ranges. You roll Non-Fighting ability to determine who has the upper hand when the fight starts, then after that you break down into combat rounds. Each round each player states what they plan to do, either blast away with Fighting or use Non-Fighting to change ranges or accomplish other side goals (activating a console, operating communications equipment, arming a bomb, etc.). The actual acts take place in order, based on whoever rolled highest without failing their rolls. Non-Fighting things just happen, Fighting racks up a number of kills based on the strength of your weapon at the range you used it, which is why range is important. Non-Fighting might seem the lame duck of the two, but it determines both initiative and ability to be promoted, which are huge in the course of the game. Character creation forces you into a devil's choice between the two. The whole thing is quick, dirty, and bloody, just like the genre it emulates.

Each mission you are sent to a new alien environment to rock the socks off some new alien species. The GM has a big pool of threat tokens, which they spend to create opposition for the players. Each environment offers many potential practical issues, and each alien race has its own difficulty and special abilities. All this stuff is determined by random selection or GM-choice, but is balanced so that there are ups and downs during the campaign. In the course of a campaign, PCs might die off and be replaced, you can climb the ranks or get tossed down them, and you can get a whole arsenal at your disposal. The whole thing is capped off by no one being quite the same toward the end of the war. The structure of the game is a series of combats and missions which are woven together by relatively free role-playing, which imply a quick and light fun, with some depth just below the surface. Overall 3:16 is full of fun and engaging ideas with surprising depth for so slim a volume.