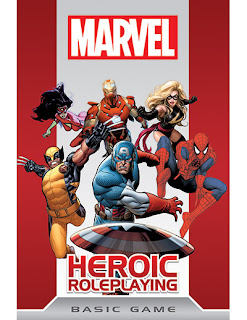 Last August there was an announcement over on the Margaret Weis Productions (MWP) website that I read quickly and blocked from my memory. It surrounded them acquiring a license from Marvel. Then I checked my DriveThruRPG newsletter and laid down (a relatively small amount) of dough immediately. Now don't get me wrong, I have a bit of a love/hate relationship with MWP, and specifically with the base Cortex system. I didn't really like the treatment of Firefly with their Serenity RPG, and I didn't like their Battlestar Galactica RPG at all. Supernatural seemed a bit better. Cam Banks then took over as design lead/creative director, and the quite cool Smallville RPG came out, though I didn't see myself playing it without a very specific group. Rob Donoghue joined up with MWP for the excellent spy-thriller Leverage (based on the show of the same name). In this recent batch of games the Cortex system has been gutted and remodeled into CortexPlus. I was overjoyed to hear they would both be working on the new Marvel project, which has now taken form as the Marvel Heroic Roleplaying Basic Game (MHRBG).

Overall this game is a blending of the good parts of several games. First and foremost it takes the CortexPlus system, of creating dice pools based on categories of abilities. It is like Smallville in that some abilities are relational, though nothing as complicated. It is like Leverage in that you also have abilities that are better than others, and takes the same approach with Super Powers. It has taken lessons about aspects, placing aspects of scenes, and a fate point-style mechanic from Spirit of the Century/FATE. Similar to Dresden Files, the fate points (Plot Points in MHRBG) serve as the game-play balance of heroes with disparate power levels. Taken together these create a game which traditionalists probably won't love; However comic book enthusiasts, new RPG players, and the indie crowd will love. The book itself is fairly well laid out, the art could have been punchier but its very well organized at a typeface that is comfy and a writing style that is easy on the reader. It has a good index, cheat sheets, and chapters that follow the flow of play.

The Core Mechanic of the MHRBG is the same as the other CortexPlus games, except that you tend to gather more dice. Basically its a dice pool mechanic where you consult your character sheet and pick a series of abilities from a set of categories, one from each. Each ability is listed as what type of dice you add. You end up with about 4-8 dice, depending on your action. You make a roll and pick 2 of the dice to see if you succeed, and then pick one to determine how much of an effect you had (similar to the idea of the One-Roll Engine). Ones have a special meaning, you can get a plot point from the GM but the GM gets a Doom Die. Every roll is resisted by the GM, whether an NPC (which have dice stats of their own) or just luck. Doom Dice are like an ever-increasing stakes as an adventure goes on, its a dice pool that the GM uses when a roll is just about luck. It's also a pool he can spend from to gain some narrative control or to add oomph to the bad guys.

The Doom Pool/Plot Point concept is the coolest part of the mechanics in the game I think, a pacing mechanic that mirrors comic books and isn't something the GM has to police carefully. Just throw some Doom Dice when you feel drama needs to happen and instantly the ante is upped. Is the lower power level or tragic hero getting smacked around? Well they have a huge pool they can draw on to have an awesome comeback.

This brings us to the thing that will cause a lot of people to drop the game like a load of bricks. This is sad because if they gave it more time they would realize what is really going on. MHRBG is designed to emulate the super hero genre. That means that The Hulk and Nick Fury can be in the same game group, so can your Jubilees rub elbows with Wolverine. This means that Character Generation doesn't have any balancing, within reason you can make really a powerhouse hero that has few weaknesses. Essentially you pick what stats and powers you have, and how good you are at them. The only limit is the shared social contract or the tone the GM advises. This could lead to some initial confusion or analysis paralysis in character generation. What I think could have been emphasized, which may not be clear to newer GMs, is that the Doom Dice/Plot Point mechanic gives the powerhouses less control and flexibility to balance their frequent success.

Super Power levels have a nice scope and scale explanation based on their dice level, and the guidelines for what abilities do is clear. There are limits and special effects that make no two Bricks or Blasters the same. For those without much experience with RPGs, or who have a hard time with the chargen can use one of the slew of licensed characters or strip them of trappings and use them as a template.

Experience points in the game are also cool. Basically each character has two sets of Milestones. These either reflect character's personal goals/development, or can be drawn from a set of adventure-based goals that the GM provides. So let's say your character is all about being a Loner. You would get a small XP award if you chose to go it alone, you would get a moderate XP award for snubbing a team member when they need help, and a huge XP award and completing the Milestone when he leaves the team in a situation after a team member is taken out or overcomes it by taking a hit for a team member when they would have been injured.

Conflicts the game are universal across different contexts, whether filibustering or fisticuffs. Initiative is made simple, the first to go is who would follow from the plot by the GM. They then say who goes next. If you get too greedy picking players, all the NPCS get to go, possibly twice, before the players go again. This gives combat and complex skill or social scenes a fast flow and some flexibility for the plot. From conflict players can suffer damage at a Social, Emotional or Physical level. Take too much damage in one scene and you can get knocked out of the fight, and pick up an injury that can stick around. If you get too many injuries or bad enough of an injury, its curtains (until you come back to life, your clone activates, alternate you travels across the multi-verse, your ward takes your place, or are resurrected by alien technology as a cyber-crime-fighter that is).

MHRBG is set up to plug and play with licensed Events, essentially separately sold campaign and setting book in one, lifted from Marvel's back catalog. They pretty much assume you'll use the licensed characters in licensed events, but don't skimp on GM flexibility within these events and give you all the tools you need to make your own. I prefer this method of making a viable game line, wherein all the rules are in one place and you put out setting fluff and adventures. The Games Workshop / D&D 4e rules-creep seems more exploitative of the fan base, where you have to keep buying books to keep up with new rules in order to just be able to play with your friends. Better still MHRBG is priced with this in mind. You can pay 20 bucks (or much less on some sites)for the PDF which is hefty 200 something pages. I really hope they make the print book at the same price point, it really worked for the Savage Worlds Explorer's Edition. We'll have to see how that business plan goes, but I'm cautiously optimistic.

The Whiny Marsdens
(sorry James, you made a great Corny Collins though!)