So You Want to Euro-Game Part 2 and 3: Lord of the Rings and Pandemic

So I'm continuing today with my tour of great Euro-games to introduce newcomers, with two excellent boardgames, Reiner Knizia's Lord of the Rings, and Z-Man Games' Pandemic. Both of these take a twist on the traditional board game by being co-operative rather than competitive, which is no stranger to our role-players. This makes them particularly good for your role-players to make the transition to board-gaming.

My criteria from last time was three-fold: Simple, a Clear Goal, and Deepening Strategy. We'll check out each of these in my personal trifecta of Introductory Euro-games.


Lord of the Rings 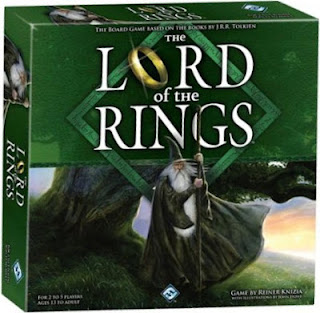 Lord of the Rings is a cooperative game in which you take on the role of the Hobbits in the novel of the same name as they attempt to destroy the One Ring in the fires of Mount Doom. To get there you collect a hand of cards which you play on each turn to move markers along tracks that either net you special cards or to finish a board. When you finish a board you move to the next step toward Mount Doom and begin play on a new board. You have to balance this with spending a turn to draw more cards or move back on what is called the corruption track. The corruption track embodies the dark influence of the ring, players have to balance moving themselves away from Sauron's evil marker or making it worse for everyone by moving the marker forward. It's a bit like trying to climb out of a well as the water level slowly rises. The game is challenging and everyone has to manage their resources together to succeed.

Simplicity: A middling rating here, while the pieces are easy to understand there are a lot of them. The concept of moving tracks on two separate boards is confusing the first time you play through. What you do on a turn is straightforward, and you don't have to manage a "bad guy" phase.

Clear Goal: Pretty good rating here, you're supposed to destroy the ring without dying. The thing that keeps this from an awesomely clear goal is that the purpose of tracks that don't finish a given board is ambiguous. Some of the card text takes some thinking, but for the most part is straightforward.

Deepening Strategy: Yessiree. This game never quite plays the same way twice, and there are lots of subtleties that emerge after a few plays. Even better, to do well everyone really needs to cooperate. The one disheartening thing, is that this game has player elimination if you are corrupted by Sauron, which is rough on newcomers sometimes. 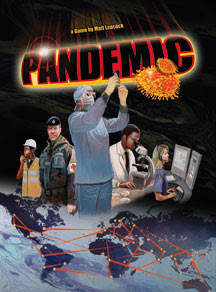 Pandemic is also a cooperative game. Players take on the role of members of the CDC, each player has special abilities which they combine to successfully fight off four viruses that threaten to sweep the globe. Players have a hand of cards and can perform a series of actions which either help them fight the viruses more efficiently, or help remove virus cubes. You travel around a risk-like game board to quickly put down the cubes before they proliferate. After each player performs their action, there is an enemy turn. During this turn the player that just finishes draws locations to put more viruses on. If a location gets more than 3 cubes there is an outbreak and all locations around it get 1 additional cube. This can create huge chain reactions which can cause everyone to lose. If that wasn't bad enough, you can also gain epidemics, which add 3 cubes to a location, which frequently causes an outbreak. What all this adds up to is a challenging and fun game experience that definitely requires to players to plan and communicate.

Simplicity: Pretty good rating on this. The player turn can be a little confusing the first round, but visual aides help this considerably. It takes one play to realize what to expect from the Virus turn. Once the basic hurdles are done, turns fly by with disconcerting speed.

Clear Goal: Yep, great job here. You have to stop the viruses from overrunning the globe. Colorful little squares are a clear and easy visual representation of the enemy, and even younger gamers can grasp that quickly. The more complicated sub-goals you might pursue really just serve to deepen the strategy.

Deepening Strategy: Excellent rating on this. The first game is your test drive, and you figure out that you HAVE to talk to the other players, with some frequency. Learning how best to respond and capitalize on special abilities of each CDC character is the epiphany that comes with the second play. By the third play and onward you see patterns that can get you saving the world with ease, but still encounter new chain reactions that will shock you.

Well I hope you enjoyed my quick exploration of Euro-gaming, expect new Pen and Paper role-playing posts soon!
Posted by Whit at 5:04 PM