Below is a review, originally posted over on rpg.net. Subsequent reviews will follow a similar format: 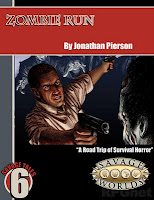 This is a play-test review of the PDF re-release of Savage Tales #06: Zombie Run (Savage Worlds) by Jonathan Pierson, updated for the Savage Worlds Explorer's Edition rules.

The Zombie Apocalypse has come and gone. A few desperate survivors cling to life in the remains of an abandoned office building. The vending machines are running low and if anyone is going to survive, they have to go outside.

This mini-campaign can take you across the country or you can use it to run your own campaign with its many useful resources. I love Zombie games and post-apocalyptic game settings, so I jumped on this PDF when it was re-released for the latest version of the Savage Worlds rules. I'll take you through what you can expect and my own experiences with the mini-setting. I've run this twice at the table and once on as a forum Play-by-Post.

What you'll get
Inside this PDF you'll find:

There is quite a bit of content in here for not a lot of pages. The short list of hindrances and edges are decently in-genre. Of anything they seem a little tacked on, I'm not sure how much they really add to your game. The gear list, by contrast is spot-on. It's brief but it covers everything that you're missing with just the core rulebook. You'll get the genre staples of Molotov cocktails, chainsaws and improvised weapons.

You'll also get a scavenging mechanic that works with what you already have at the table: cards. Starting equipment comes straight from this table, and results in a very genuine feel to what the PCs have on them.

The campaign as-written is definitely about travel. To keep things moving quickly, this is abstracted into fuel levels. This works nicely in that the players can see the fuel dwindling, but its not a pile of bookkeeping.

The campaign itself totals in at about 8 or so sessions. These are nicely written and give the players a fair number of options without too much railroading. A creative GM could turn this into a larger campaign, but there is enough here to just run straight through these and have a nice length. Many of these are also daringly disturbing, which is very in-genre. You have a lot of pre-made maps for these adventures and some figure flats in the back.

The interlude system here uses cards again, it lets you cover large expanses of time along the road, but also allowing for interesting opportunities to role-play and learn about the character's pasts. It also gives a reward, which can encourage those lovable power-gamers incentive to develop their characters a bit.

What you don't get

OK, so most of these are beyond the scope of this product. But I think its important to know what you aren't going to see. You get the basic zombie stats, which are well thought out, but you won't see the super-zombies and tongue strangling that has become popular as of late. These can be added really easily, but its not in there already.

As a GM, if you want to do anything outside of the plot points you have to make it up yourself. This is where an adventure generator might have helped out a lot. A few sparks might extend the life of a campaign.

I wasn't expecting to see much in terms of Alternate Campaigns, but a little blurb would have helped. What if your players really want to stay in a City, or just want to eke a life out on the road. The plot points really expect and A to B progression.

Another element that is common in Post-Apocalyptic games is to have the ability to switch to a sandbox mode. The text tends to encourage you to spur your players to moving on, which I think could annoy players quickly. A little support for setting up a community or maybe just "holing up in a building" would have helped here.

Overall the layout can be a little confusing, it takes a lot of page flipping to realize that the Zombies are hiding in the back. It doesn't have a table of contents, which would have solved this nicely.

The easiest thing about this setting is everyone 'gets' it. Almost everyone has seen a Horror movie once, and can get the idea of Zombies very quickly. The characters are only slightly larger-than-life versions of you and me. These are all advantages of this genre but this mini-campaign builds on all of these elements nicely.

It jams you right into the action of trying desperately to cling to life, and across the three-ish groups I've run through this the opener was universally popular. What my players generally didn't like was the rails that happen shortly after the first adventure. This was frustrating for many, and in my view unnecessary. I'd say either bust out with the second adventure or take your time with the Baxter Building. I ran the first two table-top adventures pretty much by the book, and everyone had a blast except for the bits I mentioned above. The third campaign I left a little more sand-box and have been having great results.

This well-worth your money for the content you get. If you want it to be a long campaign, you'll need to flesh it out a bit in places. You have some cool and very creepy adventures to work with. The mechanics that are added to the basic Savage Worlds rules enhance your experience without being obtrusive. It's short, but sweet.

Style - 3 - There is a lot of text to not have an index, and a few ordering choices in what comes where that I wouldn't have made. The art is nice, and in-genre, though most players probably won't ever see the book. The flavor text and descriptions really suit the genre.

Substance - 4 - They crammed A LOT into 55 pages. Several mini-mechanics, and lots of plot twists and turns. The ideas herein smack of being well play-tested, though there is a bit too much railroading for my taste. The mini-mechanics in particular are not just fluff.

Two thumbs up, if they weren't already a Zombie snack.
The original review is posted here:
http://www.rpg.net/reviews/archive/14/14779.phtml
Posted by Whit at 12:05 PM