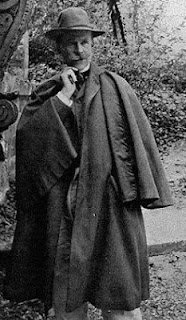 I'd like to discuss another small press game this time, Felbrigg Herriot's Lovecraftian Shorts. Increasingly some of the best ideas from indie games have found their way into more mainstream role-playing games, so seeing new stuff constantly coming out all the time is exciting. Lovecraftian Shorts is aptly named, its a light game with the same tightly written prose as Death Bringers (check out the review if you haven't yet). It aims to emulate the Cosmicist tales of H.P. Lovecraft, with a nice splash of pulp sensibilities. It accomplishes this through a heavy narrative focus in the mechanics and in the tight adventures it promotes. It has a style reminiscent of role-playing game Baron Munchhausen crossed with Fiasco.

The core mechanic of the game involves a strict turn rotation in which each player sets up a scene, sets an appropriate obstacle for themselves, then rolls a d10 against a target number of 8. If they succeed they narrate accordingly, and play passes to the next player. Success is grand, but failure can be overcome by a player economy which avoids the whiff factor. You may be asking yourself at this point, "What does the GM do?" The answer is sample, they don't GM, they join in. The way the game is set up is as a riff between all the players, with each person taking on side characters and narration freely, as long as they respect each character's autonomy and the plausibility of the universe. Mechanically, the high difficulty of the rolls, the focus on using occult objects for maximum benefit, and the penalty mechanics causing you to go mad all serves the central goal of emulating the hopeless struggles of Lovecraft's writings. This kind of focus is a must in small press games, and there is nothing in the book that doesn't seem to serve this goal.

Visually, the book is well laid out with a readable font, clear writing, and the virtue of brevity. There isn't an index but the table of contents accomplishes this just as effectively. I was pleased to see a nicely worked out example of play, shortcut sheets, and the equivalent of a GM's section explaining how to make compelling hero cycle style stories. One of the nicest touches is the art. There are a series of photographs from around this era, with sometimes humorous yet oddly creepy captions. This adds a ton to my desire to try this game out, and evokes the themes of the fiction. There are a few formatting errors, but generally the editing is tight.

Overall, this is a nice game to take up the time before a session and flex the role-playing muscles. I'd like to maybe have had more random tables for character creation and especially for scenes. This is something a GM could cook up, but I was hoping for something more akin to the multiple play-sets that we see in Fiasco. That aside Lovecraftian Shorts eloquently accomplishes its goal with none of meandering or pretentious qualities that sometimes slips into indie books. This is a nice forty-ish pages, this game could also serve as a nice party game or intro to role-playing at a ridiculously affordable price.