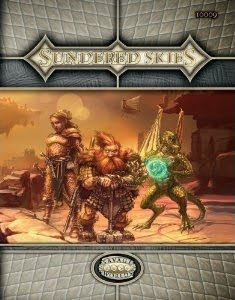 While read-through reviews are great and all, this time around I would like to review the Sundered Skies campaign setting by David Blewer from Triple Ace Games for the Savage Worlds system. I've long been an admirer of the quality and speed of the product that Triple Ace puts out, and the work for Pinnacle they did before that (including this setting book). So while Sundered Skies has been out for some time, I'm pleased to give you some insight into what their product is like in a long-running campaign.

Sundered Skies is a fantasy, but takes place after a cataclysm breaks the world apart into islands, and leaves a glow in the spaces between which will gradually drive you homicidally insane. I know all of you don't know me, but this is the kind of thing that warms the beating, pitch black, old-one-loving hunk of obsidian in my GM-ing chest. The PCs form the bravest of these folks, venturing between the islands in sky-ships seeking their fortune. It's kind of like if the movie Captain Blood starring Errol Flynn had elves and skyships, and the screenplay was written by HP Lovecraft and scored by Danny Elfman. It's a little like this, with the suck removed.

The overall character of the book is similar to many other licensee products, but on the upper end of what you tend to see at the thirty dollar price point. Broadly, you will be getting new races, edges, spells, well-written setting and background fluff, and adventure generator, a hefty bestiary, and a full plot-point campaign.

The new edges and races and such add a nice flavor to the world, but is flexible enough to be used for other fantasy campaigns. Back when it came out, it was the only up-to-date book for running Savage Worlds fantasy. Now you have the Fantasy Companion, Hellfrost, Shaintar, and others I'm forgetting. Still though, you're getting some cool new ideas too, from an anthropomorphized slave race to evil elves to a short lizard race that can eventually evolve into dragons. New edges bring in some nice options for spell-casters that really fit the setting nicely.

This setting book is a nice example of how a plot-point can be done elegantly, with individual adventures that can occur out of order, but still containing a meta-plot and lots of juicy stuff for making your own stories. For those not familiar with the concept, a plot-point is what I believe the best thing (and certainly not the only good thing) to come out of Pinnacle Entertainment Group, who brought you Savage Worlds. Basically it strikes a nice friendly middle ground between the structured modules of the TSR days and games where you get just locations, situations and NPCs. The world itself nicely supports the plot-point, because needing to travel from island to island leads to self-contained series of adventures. Making travel difficult tends to keep the party on any given island for a while, but the PCs really have a choice about what they do and when. The gazetteer in the book helps you write things consistent with the world, and the adventure generator is really nice when the PCs totally stump you.

OK, that's all great, but how does it play? Well I've run two short-lived forum games of it, and one full-fledged tabletop campaign start-to-finish, which can speak for itself. I'll focus on the campaign as it was the longest-lived. The introductory adventure provided a nice jumping off point for a lot of player freedom. In it you go from sky-worn scrappers to having some capital in your pocket and a small sloop. It does a nice job of being a tutorial adventure, and skips a lot of boring low-level drudgery (and a contender for best first adventure alongside the one in Pirates of the Spanish Main that Paul 'Wiggy' Wade-Williams wrote).

My players hopped from island to island, dredging up secrets from the past. Swashbuckling with glowmad pirates and running from elf-conjured mega-plants took them from Novice to mid-Heroic by the time the game concluded. The endgame was a lot of fun for the players. I don't want to spoil it, but its a very epic and satisfying conclusion where they make a huge difference in the world. My main critique is that some of the pointers to the next major event were relatively obvious to my players, so they tended to beeline from one to the other. In the end I had to adjust the conclusion noticeably to fit in the secondary characters they missed. If I had to run it again, I would have spread things out a bit more and let the PCs build stronger connections in the world. At the end of the campaign my players tended to echo this, feeling that it was over a bit quickly. However, they were happy with the conclusion and enjoyed the meta-plot. There is a ton to work with though in terms of setting, you could easily run a second campaign in this world without a problem. Though I haven't had a chance to peruse them, there are a ton of additional splat books and adventures that Triple Ace has put out.

The Grog Guzzling:
The Bilge Drinking:

Overall this book comes well-recommended a great example of a high quality product put out by a licensee of the Savage Worlds system. If it sounds at all your cup of post-apocalyptic tea, check it out.
Posted by Whit at 5:06 PM