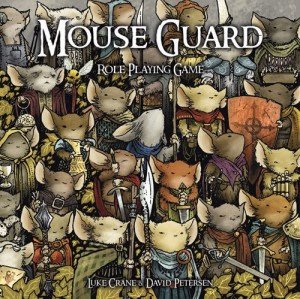 Hey everyone, it's been a little while, but I wanted to post up a review for one of my all-time favorite RPG books. While Luke Crane has put together a lot of excellent games, from the crunch-to-make-good-role-playing of Burning Wheel to the mind-bending psychology of the machine that is Burning Empires, I think really nothing can beat the simple elegance of Mouse Guard. Sooo... you can tell this will be a favorable review already, but let me show you some of the things that makes this my go-to book for introducing new folks to the hobby.

So the premise of the game is that the PCs are intrepid protectors of the kingdom, guarding against death and danger from outside and within. They are also anthropomorphic mice. This may put a few people off, but at its core its a game of heroism against insurmountable danger, and hence has a natural appeal to most gamers. The art and layout of Mouse Guard closely follows the graphic novel series of the same name, which is easy on the eyes with a large typeface and a lot of art. It is clearly not as intimidating as most role-playing books. This sets up the nature of the book; it is something that is meant to be read by anyone and is very clear and concise.

Mouse Guard introduces game concepts piece by digestible piece, in a manner similar to other Burning Wheel books. First you set up the core mechanic, and then move outward to progressively more complex rules. The core mechanic uses a dice pool, you look up skills or ability numbers on your character sheet, add any modifiers, then gather up a like number of dice and roll to get successes. A 1, 2, or 3 is a success, a 4, 5, or 6 is a coward (failure). You count up your successes and try to beat a GM-set difficulty. It's easy to find a bunch of d6s and to grasp the mechanic. We are treated to some basic background as a way of introducing what the PCs are expected to do in the game, and the components of a character sheet. We then move through resolving conflicts and what the GM does, then into specific skills, abilities, and how to make a character.

Most of what characters do is accomplished through skills and abilities, which both function by giving you a number of dice to roll when you use them. The real crux of the game though comes from Beliefs, Goals, Instincts and Traits. Each character has a belief, essentially a statement of world view or philosophy, that guides their actions. In the short term they also have a Goal, this is something they want to accomplish in the current adventure. Instincts generally serve as a boon to players. Instincts allow a PC to say something that is always true (e.g. I'm always the first draw my sword in a fight, or When tempers are high, I always try to negotiate first). Traits benefit the player as well, but can cause trouble too. Traits allow a player to gain bonus dice or make tasks easier when they apply. If they provide a hindrance they earn checks, which give benefits between missions. Basically all of these elements of the sheet are designed to funnel you toward good role-playing. Fate and Persona, the 'fate point' element in this game, are also acquired as role-playing rewards. This is great for learning to role-play for newbies and veterans alike.

Mouse Guard plays out in a cyclical fashion, which makes it easy for brand-new GMs. There are two phases, a GM turn, and a Player turn. A GM turn consists of a mission or goal. The GM presents a series of obstacles. These can be simple skill checks, versus-style tests, or full-blown conflicts. Conflicts are very flexible, and can be used for everything from Combat to a Debate. Players either succeed and overcome these obstacles, or fail, which can lead to plot twists or conditions (which are halfway between HP and status effects). Both successes and failures feed into later advancement. After the Players complete a Mission they get a Player's Turn. Players take turns recovering and accomplishing their personal desires in their off time. How much they can do depends on the number of checks earned through having traits hinder them. Then there is another GM's turn, then a Player's turn, etc. Overarching all of this is the march of the Seasons, which color the character of the challenges that the PCs face. All of this leads to a game which is easy to run, but elicits role-playing and creativity from player and GM-alike.

Skills and abilities all have a thorough explanation, with very handy examples for the GM about how hard certain things should be. This is mostly straightforward. However there are notably different abilities. These abilities are nature, circles and resources. Nature allows you to gain bonuses for doing mousy and cowardly things like hiding and foraging. You can also tax it to get a big bonus for other things, but do it too much and you lose your mousy nature and retire your character. Circles lets you name an NPC which can help you. They always exist, but if you fail your roll they might be hostile (role-playing opportunities anyone?). Resources lets you get items and gear, which give bonuses, but resources can also decline if over-used. This is important too, because you can only carry as much as fits in a few lines on the character sheet.

There are a bunch of NPCs and obstacle examples in the book, great resources for the GM. This is followed by another nice section, Recruitment, in which we have a neat method for making characters. The game provides several per-generated mice, but making new mice is far more fun. Character generation proceeds in a survey format. Players answer questions which help determine their skills and abilities, as well as copious background. There is plenty of room for customization, but this structure results in balanced and complex characters that are a lot of fun to play.

So here is the overall verdict...

A final notes:
I noticed after the fact that Mouse Guard got featured recently on MTV, which is pretty impressive. There is also a gorgeous boxed set out, which makes this even more attractive for introducing new people to the hobby.
Posted by Whit at 3:39 PM