A quick update from the Miami Gaming Authority, the stalwart gaming group of which I am proud to be a member! 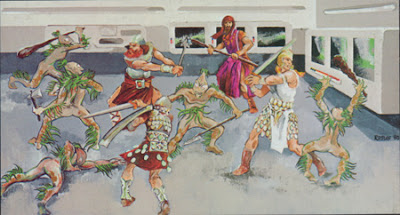 Our current main game is a retro-reboot of S3-Expedition to the Barrier Peaks by Gary Gygax. We've been running it in our go-to game system, Savage Worlds. It's been quite a flashback to be playing this old module. What's even better about it is Dan, one of our players from the beginning of MGA, took up the GM reins again after not having touched them since his college days. So far we've escaped zapping, trampling, mind-control, poisoning, amateur surgery, and tainted meat... but we've still got several levels to go at least! 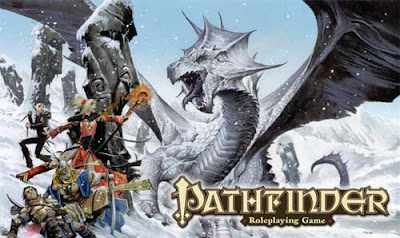 I've also started running the one-shot (more like a 3-shot at least) of Pathfinder that I mentioned previously. We really wanted to try out what Paizo has done with the OGL, as many of us haven't played D&D since 3.5 (or even 2nd!). The plot centers around a mercenary company in the employ of the Merchant-state of Essandre, which plays third fiddle to two empires locked in a bloody war. So far I've been pleased to the tweaks to 3.5, and been pleasantly surprised with the addition of collective background creation cribbed from Spirit of the Century. We may try and record some of our actual play as podcasts, if we do I'll be sure to post it here!
Posted by Whit at 6:01 PM