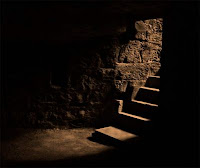 The next installment in our tremulus sneak peek.


The votes are in! Samuel will try to convince the butler to act as a guide. It’s not a bad choice, faithful reader, as Sam has a pretty high Affinity with others despite any less-than-moral inclinations. He gets boxcars! That also gives you a point of Lore, this will give Samuel a dark insight down the road. Sometimes this has special effects too, but in this case it is just very successful. Perhaps the old butler has a fondness for the young master still after all these years. When you get 10 or more on a roll you generally get a result without a lot of strings. In this case Samuel will have to promise something, but does not need tangible assurances.


Samuel shivered uncontrollably for a moment, then wrapped his arms around himself to assuage an icy death that never comes.

“Heh. Ha. Yes. It must be my imagination and all, trick of the light. Yes, I’m quite sure that’s what it is,” said Samuel to himself.


He left the book where it was, crumpled on the embroidered rug like an overindulged party guest, as its pages began to fold. Samuel slid the library doors apart, and called for Horatio.

“Horatio? Horatio!” he projected, a squeak of desperation as time lazily stretches onward.

Samuel froze suddenly when a cadaverous hand slid up to his shoulder.

“Young master?” shuddered the old man’s voice behind him.

“Oh Horatio! Good heavens, you gave me a fright,” said Samuel. “I’m glad you are here though. I have need of your expertise immediately. You see, I’ve discovered a passageway, and curiosity has gripped me.”

“Oh I see, yes there are a few nooks and crannies about, Master Blackwood. Constructed during Master Eustis’ time, you see. Most of those are ill-maintained sir; I should worry for your safety,” said Horatio.

“Oh, not at all, Horatio. Though perhaps you could act as a guide for me? After all, you remember the construction. Who better to guide me along?” replied Samuel.

“Oh, Master Blackwood, I’m not quite as spry in my advanced years, but I would certainly escort the master of Chatham when he is residence. Though--”

“Well, I would ask that you refrain from removing anything from the passageways, there are a few fragile items that are best left in the cool air to preserve them,” said Horatio.

“Oh. Oh, I see,” began Samuel with trepidation, “I suppose they are best kept well-preserved to retain their, um, historical value. Very well, I agree. Lead on Horatio."

A spot of tea and biscuits, and a hunt for a flashlight later, the two stood at the maw of the secret door. Samuel ventured a foot beyond the threshold, gingerly poked a toe forward as though placing it inside a lion’s mouth. Horatio wound past his master and forward, his shuffling feet seeking firm passage on the moist brick stairs. The pair descended several floors before bottoming out on to a rough-hewn limestone passageway.

“Master Blackwood, these tunnels served your grandfather as a storehouse for art not shown in upper floors, and the keeping of vegetables for winter. There are even a few fine vintages sequestered away, somewhere down here,” said Horatio as they continued further in.

Ok, things are lulling, time to spice things up. A Keeper move should do the trick! A tremulus adventure is made up in part from the hazards that the players may face. In this case a Hazard Move, Bar the Way, is used.

The old man suddenly lost his footing. Samuel instinctively rushed forward to grab him. It was then that a keystone behind them rattled free from the masonry. The heir to the Blackwood name turned, just in time to stare dumbstruck as the wall behind them collapsed in a cloud of powdered rock, blocking the path they had just taken.

There was nothing but the rough outline of the flashlight in the cloud, and the sound of Samuel’s coughing and the butler’s wheezing. The dust settled after an interminable minute, the filament cast a tiny beacon in a sea of murk. The sound of trickling water echoed and the gnarled grasp of a root protruded from the pile of tumbled stone.

“Horatio? Are you alright” said Samuel in a small voice.

“I-- I’m quite well sir. I must apologize, there must have been damage from moisture of some kind,” said Horatio.

“Not at all. Though that was a close thing,” said Samuel.

“Master Blackwood, I think I need to take a few moments to recover,” said Horatio with a wracking cough.

His withered arm passed the flashlight gingerly to Samuel.

“Right, well then, we can’t just stay here...” muttered Samuel, largely to himself.

From here, Samuel could do a number of different things. Help decide the path he takes! His options include:

WHAT DO YOU DO?

Musical Selections from Tom Fahy's The Rabbit King
Posted by Whit at 9:57 PM