This time on Three to See I wanted to feature some great projects which have secured my attention lately:

Project Zomboid has been around for some time, but each new test build improves the game. I'm a sucker for zombie games, and this scratches the itch for real survival game-play. While its a video game, there is a whole scripting language the developers have designed, which promises for custom stories and highly elaborated custom sandboxes. If you love this kind of thing and somehow haven't seen this, totally check it out at http://projectzomboid.com/blog/. You can even support the game early and test all the versions released. 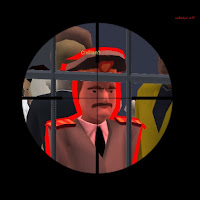 Another new crowdfunded video game, Spy Party, has an awesome concept. It's early in development, but basically purports to be a thinking-man's spy game. It's a sniper with a single bullet itching to make an international incident versus a subtle spy trying to accomplish hidden objectives. Like all great projects funded by fans (whether on kickstarter, indie go-go, or all on their own) it just needs some help to be fully realized. A great two-player game that certainly evokes those feelings I look for in a suspense RPG. Check it out at http://www.spyparty.com/ 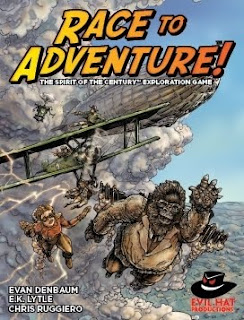 Last, and probably what I'm most excited about, is Race to Adventure! This is a board game from Evil Hat Productions. These are the publishers of Spirit of the Century, Don't Rest Your Head, and the awesome Dresden Files RPG. This board game uses the same pulpy setting as Spirit of the Century, including the Century Club, Rocket Packs, and sentient apes! Best of all, this game appears to be targeted toward newbies to euro-gaming as well as veterans, and has a quick play time. These are both great things to have in one's library. Check out their kickstarter at: http://www.kickstarter.com/projects/evilhat/race-to-adventure-a-spirit-of-the-centurytm-board
Posted by Whit at 8:57 PM