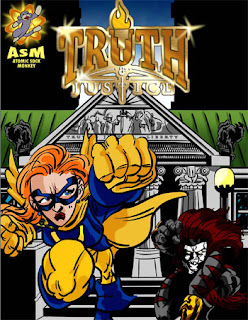 In this episode I review Truth and Justice by Chad Underkoffler and published by Atomic Sock Monkey Press.

Truth and Justice on RPGNow

As you might have gathered from some of my reviews, I'm a big fan of super-hero settings, especially those which closely emulate the feel of comic books. Check out the reviews of Shikishima Heroes, Marvel Heroic Roleplaying, or our current running campaign of Necessary Evil. Truth and Justice by Atomic Sock Monkey Press seeks to provide a rules light, high octane game which allows for the kind of flexibility you see in the pages and panels of our favorite heroic figures.

The Heroic High points include: The Villainous Lows include:
The book is laid out in a series of chapters, covering the genre, the basic system, superpowers, conflicts, GM advice and three sample campaigns. The art is about what you would expect in a small press book, totally fitting for the book but also not your gorgeously painted color spreads either. A great table of contents and cheat sheets, but no index.

The core of the game is the Prose Descriptive Qualities (PDQ) system. This shares some similarities to Fudge in its use of names attached to a ladder of difficulty (here it runs from Poor to Master). This ladder serves both as a bonus to die rolls as well as a difficulty to beat. For any action you roll two six-sided dice and add a bonus to beat a set difficulty. Which bonus is added depends on which of your Qualities applies based on the narrative, each has a descriptor which gives you an idea of when it might apply. It's a quick system and easy to pick up. Normally I would say this would get stale quickly (and has been my experience playing PDQ games vanilla), but Truth and Justice layers on Super-Qualities, your powers, and Hero Points, fate-points and advancement rolled into one. These additions really make the game.

Making a character in this system is quick but necessitates a fair amount of creativity. Similar to FATE's skill pyramid and character generation in many other systems, you can either have a few really strong areas or many pretty-strong areas. First you set these up for the mundane qualities of your character with a pool of points. Once this is done you get a second pool of points to add Super-powers. Super-powers are built the same way as the other qualities, but are on a whole different scale from mundane abilities. They allow you to either pack a bigger wallop, take a bigger wallop, or allow access to narrating things a normal human could never accomplish. A few of these are maybe a bit too powerful, but some tweaking can bring them nicely in line with the other powers. The slew of powers in the book can model everything I can think of and the author encourages, as they put, to have a Do-It-Yourself aesthetic to cover anything not in the book. It's a tight design, which is at about the lightest shade of crunch I'm typically comfortable with.

The core is great, but the mechanic which really makes this game is the Hero Points/MAX system. Hero Points are earned every time a character follows their motivation, when they act heroically to their detriment, when being screwed over by the GM, or playing to their disadvantages. Hero Points are used for benefits, using powers in new ways as stunts, and limited narrative control. Each gain of a Hero Point gets you closer to a point of MAX. MAX is used to advance your character, cement stunts as a regular thing, or add mundane qualities or super-powers.

To perform simple actions you skip the roll as long as you exceed the set difficulty, if its less you make a roll against the set difficulty, if its a real conflict against a foe, you use the conflict rules. This is a series of rolls based on the narrative situation, the margin of success damages your foes. Damage isn't taken out of hit points, instead your choice of qualities are temporarily reduced. If they all zero out your opponent takes the fight. Finally, in a inspired concept, the first damage you take is noted by the GM and used to generate the next plot hook. This works incredibly well in all the games I've played using this system, and lets the players guide the plot in neat ways. What's really nice is it doesn't matter whether this conflict system is a knock-down-drag-out fight or a debate at the United Nations.

The Campaign settings in the book are quite original. This paired with the genre explanation and advice give a ton of resources to a prospective GM. This is very well written and exhaustive, and is worth nearly the price of the book alone.

The real downside of the system is that it requires a lot of effort on the part of the GM and players to create a compelling adventure. The rules aren't going to give you a lot of mechanical frame to hang your game on. This can be great in a creative group, but will be pretty rough if you start to lose steam. This is something true of all narrative-based role-playing systems, and is really just a "know-what-you're-getting scenario. Overall, I recommend this strongly if your group likes a narrative focus, a fast pace, and nice emulation of the super-hero genre.
Posted by Whit at 7:37 PM