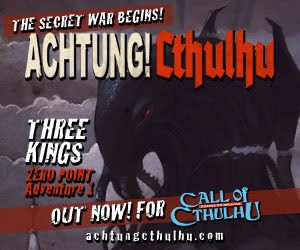 Lovecraft and the related gaming materials have a definite special place in my heart, Call of Cthulhu was very revolutionary, so much so that we can still play it after thirty years without batting an eyelash or getting that dated feeling. That said it's been some time since I've been excited about a product for the original system, usually I stick to the classic modules. The new game company Modiphius does have me intrigued with their new Achtung Cthulhu! setting, which is being released for most of the major Lovecraftian RPGs (Call of Cthulhu, Trail of Cthulhu, Savage Worlds) as well as their own new system Expeditions. They have released the first in a series of products for their Zero Point campaign for the original Call of Cthulhu game system, with other systems to follow.

Zero Point Part 1, written by Sarah Newton, contains five adventures as well as some additional rules to fill out gaps in Call of Cthulhu. The campaign takes place on the eve of World War II, as courageous intelligence officers seek to stop a dark plot around Castle Karlstein in the countryside near Prague. I will spoil none of the plot, but it has a tense thriller tone and manages to be substantially more just Cthulhu World War II. It is written in a flexible style which gives suggestions about alternate paths, while maintaining the depth of the material. This reminds me of the Plot-point campaign structure in a lot of Pinnacle books, in that it acknowledges that no plot survives the party and gives options that help rather than railroad. The tone is strongly pulp and embraces it fully.

The art in this campaign 'episode' is really impressive. They use a background graphic, but it looks clear and crisp and doesn't interfere or muddle the clear typeface. In true Call of Cthulhu fashion there are a slew of props, all of which look like real era documents. Every other page has neat renderings in the dark blue/green/black that set a very Noir tone to the game.

There is an immense respect here for historical events, and many characters are real individuals who were war heroes, well known or otherwise. While its definitely pulp, it has a lot of research behind it and an authentic feel. One detractor is that while the rules additions help, the original Call of Cthulhu is a bit deadly for most modern tastes, and there are a fair amount of machine-guns involved in this adventure. However this a characteristic of that system, rather than this product, so this is a minor issue that multi-system release would wholly resolve.

This is an eminently playable campaign, and comes packaged with pre-generated characters, to the point that a quick read through of the episode by the GM and you can be rapidly playing with little fuss. The book is priced at a sale price of ten dollars for 44 pages, and this is packed with material. I'll be looking forward to seeing the next episodes in the series, and how their campaigns are translated to other systems and anticipate their new in-house system.